The brainchild of the then Quantel Marketing Manager, David Scammell (now the founder and owner of Sohonet), the Digital Fact Book was conceived in the mid-1980s in the early days of one of our industry’s biggest transitions – from analog to digital technology. From the start, its remit was crystal clear – to provide a comprehensive, unbiased reference guide to the techniques, standards and terminologies to enable not only engineers but also all those involved with the scene-to-screen process, to apply digital technology successfully to TV.

With inventions to its name such as the first digital framestore synchroniser, the first viable digital effects system, the Paintbox digital graphics system, the first 3D effects system and the Harry and Henry digital compositing and editing systems, it was of course in Quantel’s own interest to keep the industry up-to-date with developments. However, the Digital Fact Book always went well beyond this and rapidly established a reputation as the whole industry’s go-to resource for those wanting to learn about emerging digital techniques and standards. Over the years, more than 250,000 copies of the various editions of the Digital Fact Book have been distributed free of charge around the world. 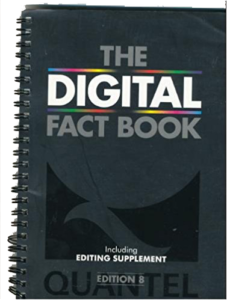 Then – as now – technology was moving on apace, and Quantel produced a new edition virtually every year to keep the industry up to date with all the latest developments; new recording formats, new standards, new techniques, new acronyms – they were all covered. Bob Pank, formerly Product Manager for the legendary Quantel Paintbox, took over editorship of the Digital Fact Book in 1993 with edition 7, and edited every subsequent edition up until the 2015 online version, which now forms the basis of the IABM Glossary.

In the later nineties and early 2000s, IT-based technologies began to creep into the TV production chain and the industry also began to embrace HD. These new directions were marked by a completely overhauled and updated Digital Fact Book marking this convergence. At the same time, digital production techniques were also entering the film industry. Once again, Quantel expanded the remit of the book to include a complete digital film reference section, and for the first time included some discussion pieces that explored the application of these technologies.

The 2015 edition came at the start of arguably the industry’s biggest transition since analog to digital – the move to IP – just at the time when Quantel merged with Snell to become Snell Advanced Media (SAM). Since then, SAM has been at the forefront of developing IP technologies into practical broadcast and media production tools and systems; SAM was one of the founding members of the Alliance for IP Media Solution (AIMS) at the end of 2015, reflecting its commitment to driving the industry into a new age with common, open standards. 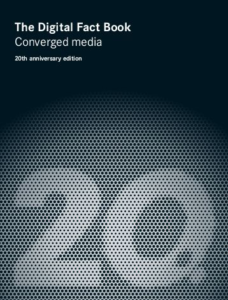 Since 2015, with the ever-increasing rate of change in the industry as we accelerate towards the IP and virtualized future, SAM’s engineers have been fully engaged. Recognising this, but also that the industry needs a continuously updated, comprehensive knowledge base arguably more than ever before, SAM generously agreed that its legendary Digital Fact Book be used to create a new industry-wide Glossary via IABM.

“With the ever-increasing rate of change and the entry of a whole new raft of technologies from outside the traditional broadcast space, it’s no longer practical for a single company to keep such a wide-ranging resource current,” said Said Bacho, Chief Business Development and Marketing Officer at SAM. “With its industry-wide reach as well as its own in-house technology experts, IABM is ideally placed to grow this invaluable resource, and we, at SAM, look forward to helping it continue to develop and carry forward its SAM founding principles into a new age.”

And here it is. The industry has cause to be profoundly grateful to SAM for its generous gesture. We are committed to carrying the spirit of the Digital Fact Book forward in the IABM Glossary – independent, authoritative, up-to-date and comprehensive. If you think it’s missing something, let us know!

Want to add a term or suggest an edit? CLICK HERE